The Polynesian tattoo – an ancestral art

Tattoos more commonly called “tatau” in Tahitian have had a paramount place in the Polynesian culture since the dawn of time.

The “tatau” played a crucial part in the life of men or women in Polynesia as it was a sign of entering adulthood.

It thus represented all stages in life, strength and courage. It also had a social connotation as chiefs, princes and kings were distinguished from the other social classes by their tattoos and thus felt protected.

The type of “tatau”, the different body parts tattooed and the techniques diverged from one archipelago to another.

Therefore in the Marquesas, tattoos would be done on men’s genitals while on the Society Islands; these parts of the body were not touched.

As for women, they were mainly tattooed on the face, arms, legs and fingers.

A tattoo – past and present

The “tatau” ceremonies could last several days to several weeks.

The patterns and drawings tattooed all had different meanings – representing animals, plants, warriors, elements of the universe, etc.

The tools used for the “tatau” looked like combs made out of animal bones, sharks teeth and tortoise scales.

The ink used was a mixture of water and soot which came from burned candlenut tree nuts.

The art of tattooing in Tahiti & Her Islands

For some time it was banned by Christianity but came back in the 80’s and is currently fully revived.

This was possible thanks to artists such as Raymond Graffe or Teve who went on a pilgrimage among the Samoan tattooists who had never ceased tattooing.

Now several Polynesian tattooists living in our islands and in the world work hard in order to give this art its rightful place and prestige. 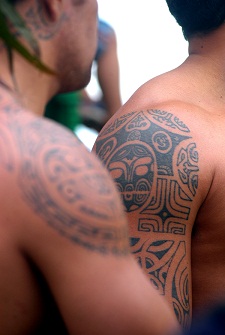 In addition, modern devices now make it possible to do splendid tattoos, and also reduce the pain caused by the old tools.

Some Polynesian tattooists such as the Marquesan brothers Siméon and Efraima Huuti are internationally known and recognised for their talent and expertise.

They both work on the first floor of the Market of Papeete.

Other talented tattooists are located in other islands like James Samuela in Moorea, and Tavita in Taha’a.