The Islands Of Tahiti are full of treasures, in particular with their culture, their history, their languages and their arts and craft talents, all in all a gem designed of various elements.
This unique destination made up of 118 islands gathered in 5 archipelagos – with their own personality and scattered in an area as vast as Europe – has no less than 5 languages and dialects.

Tahiti and its marvelous bays

Polynesians and their legendary hospitality form a people with kind and generous characters. They are beautiful persons easily sharing their joie de vivre.

The Polynesian richness lies in its ethnic diversity thanks to its incredible history strewn with many Asian, European and American migrations.

Polynesians can be proud of their marvellous islands; they know their value and in a clever way, they don’t hesitate in confronting the elements of Mother Nature in order to settle in any type of environment, as isolated as it may be.

Their ancient knowledge and traditional culture reappeared at the end of the 70s in a modernised Polynesian society.

The Polynesian culture is also very linked to the pre-European beliefs. The Polynesian mythology presents many similarities with Western mythologies, namely the divinities related to the world creation and to the elements of nature.

The Heiva I Tahiti

This is still much appreciated and is a source of inspiration for the production of Polynesian shows, in particular during the Heiva I Tahiti. Their songs and dances are nothing more than the reflection of joyful and jovial people. 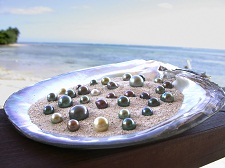 The craft industry of Tahiti and Her Islands is still unequalled within the Polynesian Triangle and is composed of various fields such as basket making, carving, tattooing, art jewellery and many others.

The craftsmen – the majority counting on selling their products in order to provide for their needs and those of their family – hold a priceless treasure in their hands.