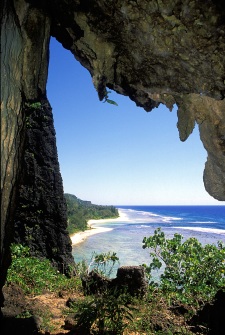 View on the lagoon of Rurutu from a grottoe

Rurutu – described for long time as a “long basket”, is part of the Australes archipelago and conceals an impressive geological characteristic – its limestone caves.

About thirty caves are perched on top of Rurutu’s cliffs, overlooking the ocean and some of them offer a beautiful view of the vast horizon.

Born from the erosion of the sea and the rain, these limestone cavities shelter surprising stalactites and stalagmites.

The coral and volcanic walls of these caves while in contact with the light scintillate for your greatest pleasure.

Beyond their geological interest, the majority of these natural monuments contain tales and legends related to the island and its inhabitants, their ancestors and origins.

Part of Rurutu’s soul is secretly retained there and is revived by the storytellers of this troglodyte island.

Rurutu’s largest and most famous cave is the one named Ana a’eo. It offers a very beautiful stalagmite forest decorated with charming vegetation.

It is also called “Mitterrand cave”. This cavity has this second name since the visit in 1990 of the French Republic president at that time – Mr François Mitterrand.

Other caves have fabulous stories. Thus, the Ana Eva cave was the first inhabited.

As for Hina’s cave, it would explain the origin of Rurutu’s weaving art. Hina – an ogress living in an excavation, abducted children without leaving a trace. One day, two of them succeeded in fleeing, and the island inhabitants managed to capture the ogress. As they were visiting her cave, they discovered pandanus braided plaits. Women were then inspired and began weaving. This history explains in a mystical way Rurutu’s basketry reputation.

Besides those quoted previously, the most visited caves are Tupumai with its ceiling decorated with shells and corals, Otare which would have contained holy objects hidden by the king on the arrival of the missionaries in the 19th century, and Peva of the point of view Arei.

Green holiday followers are sure to be happy with these incredible natural sites. Lead yourself to a visit of these extraordinary caves thanks to the family hotels suggested by Tahiti Nui Travel.