A Land of Legends

Looking to the future without forgetting the past

Nature is certainly one of the treasures of these wonderful islands covering a surface area as large as Europe.However, the relics left by the Polynesian islanders’ ancestors represent an attractive element for those who would like to know more about the people called the « Ma’ohi » (or Polynesians). This people had succeeded in harmonizing their lifestyle to the natural environment.

Today, family or collective altars and temples, called “Marae” are found in the lush vegetation of our islands. These sites were sacred places used not only for the worship of our ancestral gods, such as Ta’aroa, Tane, Tiki, Tu, or Ro’o, the creator gods, or Hiro, the god of thieves, or the Hina goddess of the moon for which many legends have been dedicated, but also for other important social events such as the coronation of a king, a council of war, or a wedding, to name a few.

The most visited Marae (sacred open air temple) today is located in a valley in the district of Paea on the West coast of Tahiti, and is called “Arahurahu”.

The Marae Arahurahu in Paea

This latter evokes the pre-European Polynesian history. Presumably, the name of the Marae would come from a story of a warrior died in a battle and cremated. Then the chief of the valley – Tumataira, deposited there his ashes called “arahu “in Tahitian.

This historic site has undergone renovations since 1953 and was inaugurated a little less than a year later. On this occasion, a pageant was first performed on the theme of the inauguration of a great leader. Since then, this ritual is repeated every year during the Heiva I Tahiti in July.

We suggest you to enjoy it whilst one of our half-day tours. 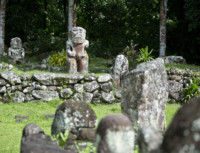 Hakahetau is a valley of Ua Pou which has to be visited. Once you are up there, you will be able to see in this valley the Poumaka piton. It has a wa [...]

The marvellous legend telling the story of the Marquesas islands creation is still enchanting... “It was at the time of the initial night. Oatea live [...]

Tetiaroa, the bird island has a very beautiful legend about these splendid animals… Long time ago, in the village of Tetiaroa lived a young boy named [...]

There are many Polynesian legends which are linked to natural sites. The Polynesians try to explain some phenomena with beautiful stories like the le [...]

Maupiti, the secret island, is happy to share with you one of the most beautiful legends, Ninahere… At the time of the Polynesian Gods, lived Paahonu [...]

Taha'a, the vanilla island has several treasures including its beautiful legends. Among them, there is the one telling the story of Fa'imano and the [...]

The Tiare Apetahi is a splendid and odorous flower which only grows on the Mount Temehani in Raiatea. A marvellous legend of love explains its origin [...]

Huahine, the island of women par excellence has several legends. One of the most beautiful is that of the dog’s track which can be seen on a rock… On [...]

Moorea means lizard (Mo'o)  and yellow (rea). A legend tells the story of the origin of the name of the splendid sister island of Tahiti… The yellow l [...]

The Islands Of Tahiti have several legends, each one more beautiful than the other. Often associated with natural sites or important or divine charac [...]