The Pitcairn Cruise with Aranui 5

The Pitcairn Cruise with Aranui 5

Pitcairn. Like confetti lost in the middle of the Pacific, this group of 4 islands (3 of which are uninhabited), with a total area of 47km², is the only British possession in this part of the world. Steep slopes, 51 inhabitants, 3 children, 1 school class, no cars, no harbour, not to mention airport…. Yet the name rings the bell…

First inhabited by the Polynesians, the population seemed to have disappeared by around 1500. Nearly 300 years later, the island was spotted by Robert Pitcairn, a young 15-year-old deckhand on a Spanish exploration ship which, however, was unable to dock there. Just 20 years later, the mutineers of the Bounty, led by Christian Fletcher, landed on the island and stayed there with their Polynesian wives. Wanted by the Royal Navy, they smashed the boat to pieces and burnt it in the island’s main bay which has been called Bounty Bay ever since. This event is still celebrated every year by the mutineers’ descendants. There then followed quarrels, diseases, consanguinity.., yet somehow the population, abandoned by everyone, survived through the ages and built itself up again until becoming today a destination brimming with History and emotion, a destination you have to see at least once in your lifetime.

Like the few cruise companies that have recently been calling at Pitcairn, the Aranui 5 is repeating the experience with an exceptional cruise from 11 to 23 April 2020. In addition to the visit of Pitcairn Island, the itinerary only includes tiny, little-known islands with just a few inhabitants. Places are limited – the 2 departures in 2019 have sold out in just a few weeks, so don’t wait too long! 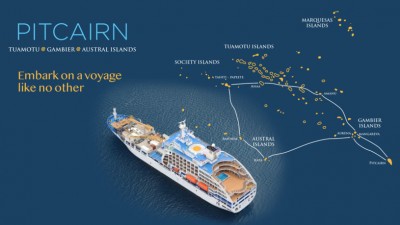