The Islands Of Tahiti

Between Land and Sea

They emerged from the volcanic activity of hot spots; some of our high island’s craters being genuine vestiges.

When they sink into the ocean, our volcanic islands unveil a coral reef and become splendid atolls. 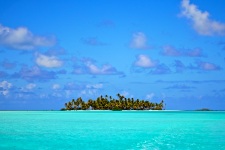 A Motu in Rangiroa

Each of the 5 archipelagos of French Polynesia has its own geological history, which explains the birth of incredible and impressive natural sites – interest of so many Polynesian legends.

French Polynesia is also a story of men, more precisely a story of navigators…

A carved Tiki in the lagoon of Moorea

Many theories were proposed, one of them says that American navigators were the first occupants of Oceania. However, several clues such as the languages spoken, proved that they belonged to Southeast Asian communities.

During this era of colonisation, these experienced navigators travelled on double outrigger canoes which were able to transport about fifty passengers and to embark food, animals and plants.

They constituted the Austronesian family by sharing the same language and the same culture. They would later be divided into 3 groups: Polynesia (“many islands”), Micronesia (“small islands”) and Melanesia (“black islands”).

Over thousands of years, their sea journeys and their tenacity led them all around Oceania, and made them shore in new lands, some of them now bearing the names of Samoa, Tonga, Fiji, New Caledonia or Tahiti and Her Islands.

As for French Polynesia, it is composed of archipelagos situated in the far east of the South Pacific; the Marquesas being the starting point of migration towards other archipelagos and islands of the Polynesian triangle…