The Valley of Kings in Ua Pou

and its deep secrets 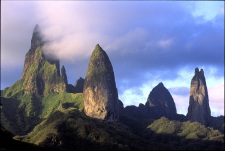 Ua Pou, the two extraordinary pillars of the house of Oatea and Atanua, can be proud of its famous basaltic peaks.

Called the island of the ancient, Ua Pou has the relics of a time when royalty governed the beautiful valleys of this mystical island.

Thus Hakamoui or the Valley of Kings still shelters some. Several stories are told including the king Heato’s legend.

An island rich of stories

This king used to live in Hakamoui. He was in love with a young woman from another valley. However, the lady did not feel the same towards Heato, which made him very furious.

As a consequence, he decided to go to the young woman’s village and slaughter the inhabitants. However, they had time to escape on outrigger canoes to Napuka, another island in The Tuamotu where their descendants still live and take part in the Festival of the Marquesan arts every 4 years.

Heato’s house is still visible. On its walls there are several sculptures and bas-reliefs of the time, but somewhat deteriorated by vandalism and time.

Situated in the village of Hakahau, the family hotel Pukuee provides an excursion in the heart of these archaeological relics. Thus, you will discover the secrets of the Valley of Kings and more.