The cuisine of Tahiti and Her Islands is certainly the best you will find in the South Pacific Islands.

Made up with exotic fresh products, this cuisine is adapted to the tastes and habits of all those who have come to settle in Polynesia.

A crossroad of tropical, Asian, and European flavours; the Polynesian gastronomy will delight your palate.

Tuna, swordfish, mahi mahi, or fish from the lagoon – Fish is at the heart of the local gastronomy. 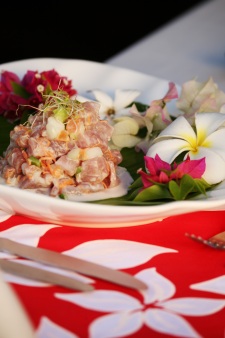 The national dish is the “Poisson Cru” (Raw Fish) which is prepared in various ways.

First, there is the Tahitian preparation which is a mixture of fish marinated in lime juice, vegetables, and covered with coconut milk. A pure delight !

With the arrival of Asian people, the recipe was adapted for Chinese-style raw fish.
The fish is marinated in a sweet sauce, then vegetables are added which have also been prepared in a Chinese tradition.
But do not be mistaken, this dish is just as much appreciated by Asian people as it is by “locals”.
It will make your taste buds go wild.

Several renowned chefs regularly spice this fundamental Polynesian dish up, each time transforming it into a masterpiece of flavour.

Initiation to the Polynesian Gastronomy 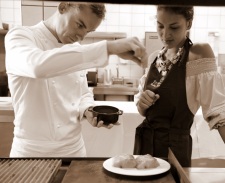 The hotels of Tahiti and Her Islands offer their guests the opportunity to discover the art of Polynesian cuisine in all its splendour and diversity.

Years of mixing cultures and people have made it possible to come up with a culinary niche for our Polynesian flavours.

Each chef thus welcomes all gastronomy lovers to get inspiration from our products and to improve them thanks to his know-how and international experience. 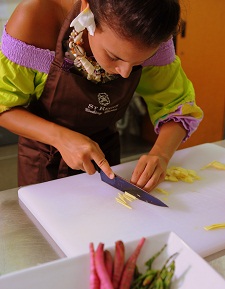 He shares some of his secrets with them and takes them on a journey through his world of senses and savours from Tahiti and Her Islands.

Different mastered techniques along with the freshness of our products such as fish, fruit, vegetables…

A marvellous combination which will delight your taste buds …

Let yourself be swept away on this gastronomical journey and unique experience !

Polynesia is served to you on a plate, for the time it takes to make a meal, you can make it into anything to suit your taste